skip to main | skip to sidebar

How To Achieve Zero COVID In TWO WEEKS Without Lockdowns, Masks, Or Vaccines

DISCLAIMER:  The following article references third-party sources and is intended for general information only, and is NOT intended to provide medical advice or otherwise diagnose, treat, cure, or prevent any disease, including (but not limited to) COVID-19.  Consult a qualified physician before beginning any sort of treatment or prophylactic regimen and/or if you know or suspect that you currently have COVID-19.  Anyone who takes or does anything mentioned (or alluded to) in this or any other TSAP article does so entirely at their own risk and liability.  The TSAP thus makes absolutely no warranties, express or implied, and is not liable for any direct, indirect, special, incidental, consequential, or punitive damages resulting from any act or omission on the part of the reader(s) or others. Caveat lector.

See also our previous articles here, here, and here as well.  Also, special thanks to Bill Sardi, Dr. Gareth "Gruff" Davies, Dr. Dmitry Kats, Dr. Mikko Panunio, and Swiss Policy Research, et al. whose research this article draws upon and cites in the links throughout.
It's May 2021, the COVID-19 pandemic is now over a year old, and it looks like it is on its way out in the USA and most of the world.  The recent global surge is really driven by at most a handful of countries, while it is declining in most other countries.  In the USA and other wealthy countries, vaccination rates are already quite high and growing, and when combined with the at least 30% of the American population (estimated as high as 50-70% in North and South Dakota, and of course New York and New Jersey) that is estimated to have already been infected with the virus (often without even realizing it), "herd immunity" has most likely already been achieved even when using the naive definition that assumes a homogeneous population.  That does not eradicate the virus, of course, but it does keep it from exploding again.
The "Zero COVID" movement has clearly been wrong about being able to eradicate the virus using lockdowns, masks, or other non-pharmaceutical interventions (NPIs), as that train has clearly left the station long ago.  Even the best vaccines are unlikely to do it completely either.  Rather, what would be needed is 1) a quick silver-bullet cure for existing cases, and/or especially 2) a 100% prophylaxis (or very nearly so) that is readily available to all.  That would be powerful enough reduce the R value to well below 0.5, which seems to be the barrier below which no NPIs, even extreme lockdowns, are able push it for very long (unless done extremely early, along with border closures AND extremely good luck), yet that is the level where we would actually have a chance at beating the virus for good.  Otherwise, it just keeps popping back up, leading to an "epidemic yo-yo".
So what would this secret sauce be? Well, as we noted before in previous articles, Dr. Dmitry Kats knows it:
NIACIN!
That's right, Niacin (nicotinic acid, or Vitamin B3), in high doses would do the trick, practically overnight: 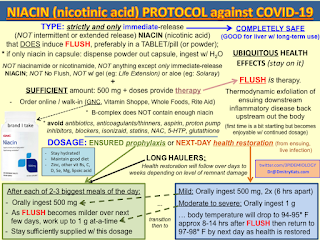 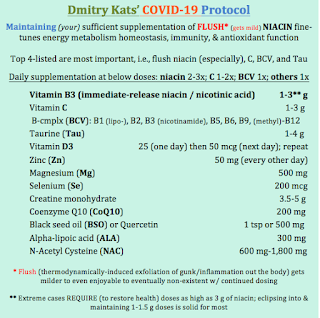 Dr. Kats himself even did an RCT, in fact:

And given how one "generation" of this virus is roughly two weeks, if nearly everyone were to follow this protocol whether they currently have COVID or not, the virus could conceivably be ERADICATED in as little as two weeks! Assuming Dr. Kats is correct about it being a virtually 100% prophylaxis, if done by at least 90% of the population for a mere two weeks, the R value would drop far too low for the virus to have any sort of chance at sustaining itself even in a totally COVID-naive and unvaccinated population.
Don't fear the flush!  It is a feature, not a bug!
Oh, and Dr. Kats knew this since MARCH 2020 and was trying to tell the world, but the ghouls in charge kept on censoring him.  Gee, I wonder why?
Because their whole diabolical racket would collapse overnight, of course.  DUH!
(And it even works for long-haulers too!  Within a matter of days to no more than a few weeks for the worst cases.  Taking it while still acute, of course, would by definition nip it in the bud even sooner.)
Adding Vitamin D, Vitamin C, Vitamin A, Zinc, Quercetin, Thiamine, Vitamin B12, Magnesium, Selenium, Vitamin K, NAC, and the amino acid Lysine would also help greatly as well, but the real rockstar here is Niacin, as immediate-release nicotinic acid. 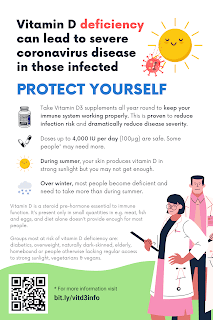 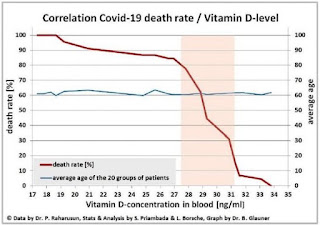 For Vitamin D, nearly everyone taking 50,000 units once weekly for two weeks, followed by 50,000 units once every two weeks until week six, would likely be enough alone to greatly reduce death and severe illness rates within two weeks, and can even end the pandemic in as little as six weeks.  Add 500-1000 mg/day of Niacin, plus the other nutrients, and you've got a belt-and-suspenders approach to eradication.
Throw in a little help from Mother Nature, given the seasonality of this virus (which is effectively "out of season" now in the northern temperate zone until well into the fall), and we basically got it made now.
And the best part of all:  we can go 100% back to normal on literally DAY ONE!  Yes, really.
So what are we waiting for?
(And while we're at it, let these vitamins and minerals be among the very first things we send over to countries like India.  Apparently, 70-90% of Indians are suprisingly Vitamin D deficient to one degree or another--and that was before the pandemic.)
UPDATE:  We have decided after writing this article to give an honorable mention to another promising addition to our arsenal against the virus, namely C60 (Carbon 60, aka Buckminsterfullerene or Buckyball). It is believed to be up to 270 times more potent than Vitamin C in terms of antioxidant, anti-inflammatory, antiviral, and immune-boosting power, and is also considered to be a good detox and anti-aging compound as well.  Worth the old college try.
Also, note that N-acetylcysteine (NAC) is now recommended by Dr. Kats in addition to niacin and the others.  Though it is probably still best to wait at least few hours between them to avoid interference, much like waiting six hours between NAC and resveratrol.  Bill Sardi also recommends it as well, as it seems to work well against COVID and various other ailments as well.  No wonder the FDA is actually trying to ban it on essentially the same specious, spurious, and utterly pharisaical grounds they have been trying to ban CBD (cannabidiol) with for years.
Another thing Bill Sardi noted recently:  the latest (clearly rigged) study that appeared to cast doubt on Vitamin C has basically been refuted upon closer examination.  Thus, not only should Vitamin C (in high enough doses, and most importantly, taken frequently enough) be back on the menu, it never should have been off in the first place.
Dr. Kats recommends taking it in a 2:1 ratio of Vitamin C to Niacin.
And let's not forget Ivermectin as well, as both treatment and prophylaxis, which has practically become "the new penicillin" and "the drug that cracked COVID" in so many countries.  Budesonide is another successful and underrated early treatment as well.  And for any cases that still manage to become or remain severe or critical, there is always the rest of the MATH+ Protocol to fall back on, per the Front Line COVID-19 Critical Care Alliance.
And finally, stop all the funny business with the way cases, hospitalizations, and deaths are counted as well, including the ridiculously high cycle threshold for the PCR testing (should be set no higher than 30, instead of 37-40+ in many places still) along with the routine testing of people without any symptoms in the community.  If you feel you absolutely must test asymptomatic people, go with the rapid test and only use PCR as confirmation if positive.  The "casedemic" is a big chunk of the overall pandemic, if not the vast majority of it currently.  Problem solved.
Posted by Ajax the Great at 6:34 PM