skip to main | skip to sidebar

Is The Overton Window Finally Shifting?

A year ago in March 2020, the Overton window of what is considered socially and politically acceptable had abruptly shifted in a highly authoritarian and even totalitarian direction due to the COVID-19 pandemic and the response of our "leaders" to it.  What was once unthinkable had become unquestionable (and vice-versa) within a matter of days to weeks, almost overnight.  And once in place, the new restrictions (lockdowns, quarantines, business restrictions, school closures, gathering bans/limits, mask mandates, travel restrictions, etc.) have proven VERY difficult to undo in the climate of incessant and exaggerated fear that the authorities just kept on stoking, regardless of effectiveness or lack thereof and regardless of the very real collateral damage as well.  It felt like the ruling Pharisees had slammed the proverbial gates of heaven in everyone's faces and sent everyone a one-way ticket to hell, never to return again.  Or so it seemed, at least. 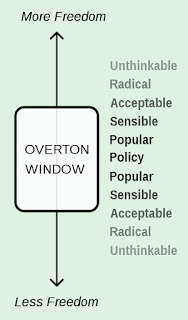 But it now appears to be finally shifting back in the direction of liberty and civil/human rights.  Little by little, and then eventually all at once at some point in the hopefully not too distant future.  As of March 6, 2021, several states (17 already, and growing) are now abandoning this whole ship of fools and doing what Florida already did back in September and South Dakota already did last May--going cold turkey (or nearly so) later this month if not already.  Once the first cracks and fissures in the facade appeared several months ago, it was only a matter of time before the proverbial dam would inevitably burst.

The last straw was most likely when they moved the goalposts for the gazillionth time recently when the establishment had the GALL to claim that we will still not going back to the true normal anytime soon even though we have all of the following now:  1) not one, not two, but THREE authorized vaccines now, 2) massively scaled-up virus testing since a year ago, 3) we KNOW how to effectively treat and prevent COVID now and have for a while, and 4) the virus has been in rapid retreat since January 2021, and even earlier in some places.  And President Biden went back on his word and extended his famous "100 days of masks" to all of 2021 and perhaps even beyond (who was whispering in his ear this time?).  So one can see how this would cause millions of people to say, "Enough already!", thus marking the "social end" of the pandemic now or in the very near future.  The establishment clearly overplayed their hand this time, and bit off far more than they could ever chew.

The lockdown and mask zealots and technocrats, now clearly on the defensive, are probably having a collective heart attack right now, or at least soiling their trousers, but tough noodles for them!  They've already had their proverbial day in the sun for a whole year now (that was only supposed to be two or three weeks to "flatten the curve", remember?) and now it's long past time to start actually living again as humans qua humans.  To the wretched New Abnormal we say, "Good riddance!"  And God willing, may a century of liberty follow after we all say, "Never Again!" and really mean it.

UPDATE:  See here, here, here, here, here, here, here, here, and here for good additional links on the topic.  And while it should clearly go without saying, we will say it louder for the people in the back:  THERE IS NO "PANDEMIC EXCEPTION" TO THE CONSTITUTION!  Ditto for the written and unwritten constitutions of many other countries which just so happen to be at least partly based on--guess what--the US Constitution as well.  The Founding Fathers, who lived through FAR worse disease epidemics than this one, and thus clearly would have carved out such an exception if they had seen fit to do so (but clearly did not), must really be spinning in their graves right now!

Oh, and by the way:  Lockdowns and shutdowns are among the most neoliberal public policy measures one could ever possibly devise, which have succeeded in making the rich richer, the poor poorer, and further hollowed out the already-shrinking middle class.  No wonder the oligarchs love them so much.  And since they tend to hurt people of color more so than white people, these classist policies are also quite racist as well. (Remember, impact > intent.)  In fact, they strengthen the entire kyriarchy as well, and for women they have basically been "patriarchy on crack" due to their disproportionate job losses, the double and triple burden faced by mothers when schools and daycares are closed, the isolation from the support of other women, and increased domestic violence as well.  Thus, lockdowns and shutdowns are a one-stop shop for neoliberalism, and all the more reason to end these highly toxic policies yesterday.

The TSAP proposes adding the following constitutional amendment (inspired by various folks on Twitter) to both federal and state constitutions, just to be crystal clear:

In other words, this can never happen again.
Posted by Ajax the Great at 2:32 PM